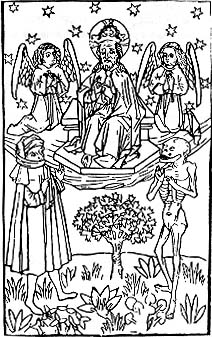 Der Ackermann und der Tod (‘The Ploughman and Death’ or ‘The Husbandman and Death’ – both titles have much to commend them), also known as Der Ackermann aus Böhmen (‘The Bohemian Ploughman’), was composed around 1401 by Johannes von Tepl (1342/50-c.1414), a public official in Saaz in .  It may represent his reaction to the death of his wife Margaretha, who died giving birth on August 1, 1400; the fact that Tepl employed a highly rhetorical style, displaying his learning through numerous allusions and the frequent use of legal phraseology, does not necessarily make his work ‘artificial’ or a purely artistic construct.  He may be utilising the rhetorical tropes he learnt at school and the popular genre of the altercatio (‘The Owl and the Nightingale’ etc.) to channel his grief and control his reaction to a shattering personal experience.  The work is a learned and lively dialogue with a rhythm that calls for it to be read out loud, and it provides an excellent treatment of a theme that can be found in literature from Gilgamesh to the present, and which will always haunt the thoughts of mankind: the human confrontation with death.

Although this text has excited a substantial amount of critical comment, especially with regard to its relation to the mediaeval tradition and Renaissance humanism, it has seldom been translated into English.  Tepl’s language is that of the Saxon Chancery in , the south-eastern German dialect on which Luther partly based the language of his Bible.  The edition used for my translation is the parallel-text version with a translation into modern German by Felix Genzmer.  I followed the original, its rhetorical intent, and its rhythm, as much as possible; and I did not shirk the subjunctive.