Illustrating the Text: the Fortunatus Woodcuts

"To illustrate": to elucidate, to amplify, to show, to light up.  This definition could also be applied to the verb "translate".  The notion of amplification is important, for it is believed that the act of explanation, of making clear, requires the usage of more words, while the act of understanding involves concision, and may be expressed in a précis or in general terse and sententious utterances.  Such aphorisms are all too easy to coin, and equally easy to inflict on others; we pack heavy luggage, then leave it for overworked porters.  There is a sense of transcending language – of mastering it so that one word can launch a thousand thoughts.  The God of Taciturnity is worshipped in several cultures; and if his shrine is visited at certain times, then his other aspect is revealed – the God of Misunderstandings.  There are of course times when we can 'save' words by expanding our vocabulary, by opening our minds to the fine distinctions created by the wisdom of our forefathers, such as that between "syneidesis" and "synteresis" – conscience as a judge of the past, and conscience as a guide to the future.  We sometimes say that the Ancient Greeks had a word for everything, and the nomination of existence represents a movement towards precision and concision.  However, such exactness is exacting, and a strain on the mind, which needs to rest in redundancy from time to time.  It is also defeated by time, for words that walk in the sun cannot avoid the acquisition of a shadow; indeed, the vagueness, the ultimate imprecision and gentle elusiveness, of words is their most endearing feature.  Furthermore, no matter how precise the words are, they are not everything; although every text can survive without illustrations, there is no text to which a contribution cannot be made through the presence of a visual accompaniment.  It is unfortunate that illustrated texts are, nowadays, only to be found in the realm of children's literature.

When a text captures our imagination, we form our own visual images from the words, and this is one of the two reasons why it is difficult to appreciate a filmed version of a text that we have read: the images do not correspond, and we are forced to see through another's eyes.  With the book before us, we engage in the act of personal revelation; the author's skill means that his words suggest visualisation, and all that is required is the participation of a stimulated reader.  The problem with film is that it is difficult for the imagination to follow moving pictures; the viewer is also compelled to follow another's time.  Illustrations, on the other hand, assist the act of visualisation, and help to anchor created moments in our mind.  It is difficult to separate Phiz from Dickens, or Tenniel from Carroll; those who have read At the Back of the North Wind will cherish the memory of the illustrations from the Dalziel studio; and the images of the work of George Cruikshank, Edgar Heath Robinson, Arthur Rackham, and Pauline Baynes are slow to leave the mind.  I am not at all receptive to artists' responses to Tolkein – particularly to those of Alan Lee – for the author's own illustrations to The Hobbit serve as my visual gateway into Middle-Earth.  At this point, illustration and translation part company, for the most illustrious illustrators are often contemporary with the authors they represent.  This is not always the case, as with Doré's Quixote; however, we tend to cherish old illustrations that accompany old language.  New illustrations can perfectly capture the tone of the work – as with the Folio Society editions of Bynge's Rides Round Britain and the excellent memoirs of William Hickey – but they are difficult to accept when they have predecessors.  All illustrated versions of Peter Schlemihl cannot free themselves from the shadow of Cruikshank; the elongation of the characters is the visual equivalent of Chamisso's tone.

Fortunatus is accompanied by excellent woodcuts, from the workshop of the talented but neglected Jörg Breu the Elder (c. 1475-1537); those of the editions are similar but inferior.  In fact, the deterioration began in the 1530s, with the generation of the printer Heinrich Steiner.  These illustrations may have contributed to the success of the text, as occurred with Sebastian Brant's Narrenschiff (1494) and Bolognino Zaltieri's (fl.1560-80) woodcuts to Vincenzo Cartari's Le imagini de i dei de gli antichi (1571); the title-pages of subsequent editions often make reference to new illustrations.  This page gives the woodcuts from the editio princeps; the woodcuts (based on the 1551 edition) can be found by clicking the link at the bottom.  Whereas horses and the bear are excellently drawn, the camels are unconvincing; they seem to have the body of a horse.  The quality varies, but is extremely high at times.  Particularly impressive is the scene in which Fortunatus sails away in a galley, heading to the East, while Cassandra buries her face in a large handkerchief (25).  The artist's attention to detail encompasses the folds of the clothes, the disturbance of the water by the oars, and the emotion of the wife while her husband sits with his back turned to her.

Occasionally, a figure appears twice in the same woodcut.  Thus Fortunatus pays the horse-dealer and is also led away by one of the Count of the Wood's men (12); Andolosia takes his leave of his men, standing and pointing towards the distance, while also walking away (35); and he both finds the Wishing-Hat under Agrippina's bed and flies out with her through the window (40).  The artist also telescopes time in the scene in which horned Andolosia speaks to the hermit while Agrippina flies away in the background – possibly the most enduring of the visual images (38).  Through such devices, each image contains and conveys a great deal.  The bare description offered here gives merely an indication of the movement, relationships and reactions portrayed in the woodcuts; each one is a small window on to the world in action.

A description of the woodcuts presented below is as follows:

4          Fortunatus flees the Earl of Flanders' service with horse, hawk and hound.

6          The villain Andrea converses with the imprisoned English nobleman in .

7          Andrea dumps the murdered nobleman, who had had the King's precious jewels in

8          The Roberti household are hung for concealing the murder, while Fortunatus is led

9          The murdered nobleman's wife and her kinsman present the jewels, which she has

discovered by chance, on bended knees to the King of England.

11         Fortunatus, wearing a large codpiece, is given the Purse of Plenty by a pregnant

12        A woodcut in which Fortunatus appears twice.  He outbids the Count of the Wood

for three horses; and is arrested by the Count's servant.

17        Fortunatus dips his hand into his Purse, ready to endow the daughter of a poor

18        Lupoldus stands with raised sword over the dead, thievish host, whom he has just

20       Fortunatus, back in , oversees the construction of a magnificent palace.

21        Standing by the King's side, with Lupoldus at his shoulder, Fortunatus chooses a

25        Fortunatus departs on his second major journey, to the East.

28        Fortunatus steals the Wishing-Hat from the Sultan, flying out through the window towards his ship while his dispossessed host helplessly flings his arms in the air.

29        The Venetian envoy Marcholandus attempts, in vain, to negotiate the return of the

Wishing-Hat.  The two men are shown sitting on stools, talking, and speaking

30       On his deathbed, Fortunatus enjoins his two sons not to split the Purse and the

Hat; they turn their heads to observe the two treasures.

31        Andolosia, who often looks remarkably like his father, rides out on his travels with

35        Having been tricked out of the Purse of Plenty, Andolosia dismisses his shocked

38        Having lost both Purse and Hat, and eaten magic, corniferous apples, Andolosia

asks a hermit for help.

39        Andolosia, disguised as a doctor, treats Agrippina, who he has tricked into eating a

40       He finds the Wishing-Hat under Agrippina's bed and abducts her a second time.

42        After refusing to remove Agrippina's horns, Andolosia leaves her in a convent near

Saint Patrick's Purgatory.  He pays the Abbess her fees while Agrippina sits sadly

44        The marriage of the Prince of Cyprus and Princess Agrippina.

46        Riding home after the wedding festivities, Andolosia is ambushed by two villainous

earls, and his men are killed.

47        Count Theodorus speaks with Andolosia, who is wasting away in the stocks, prior to 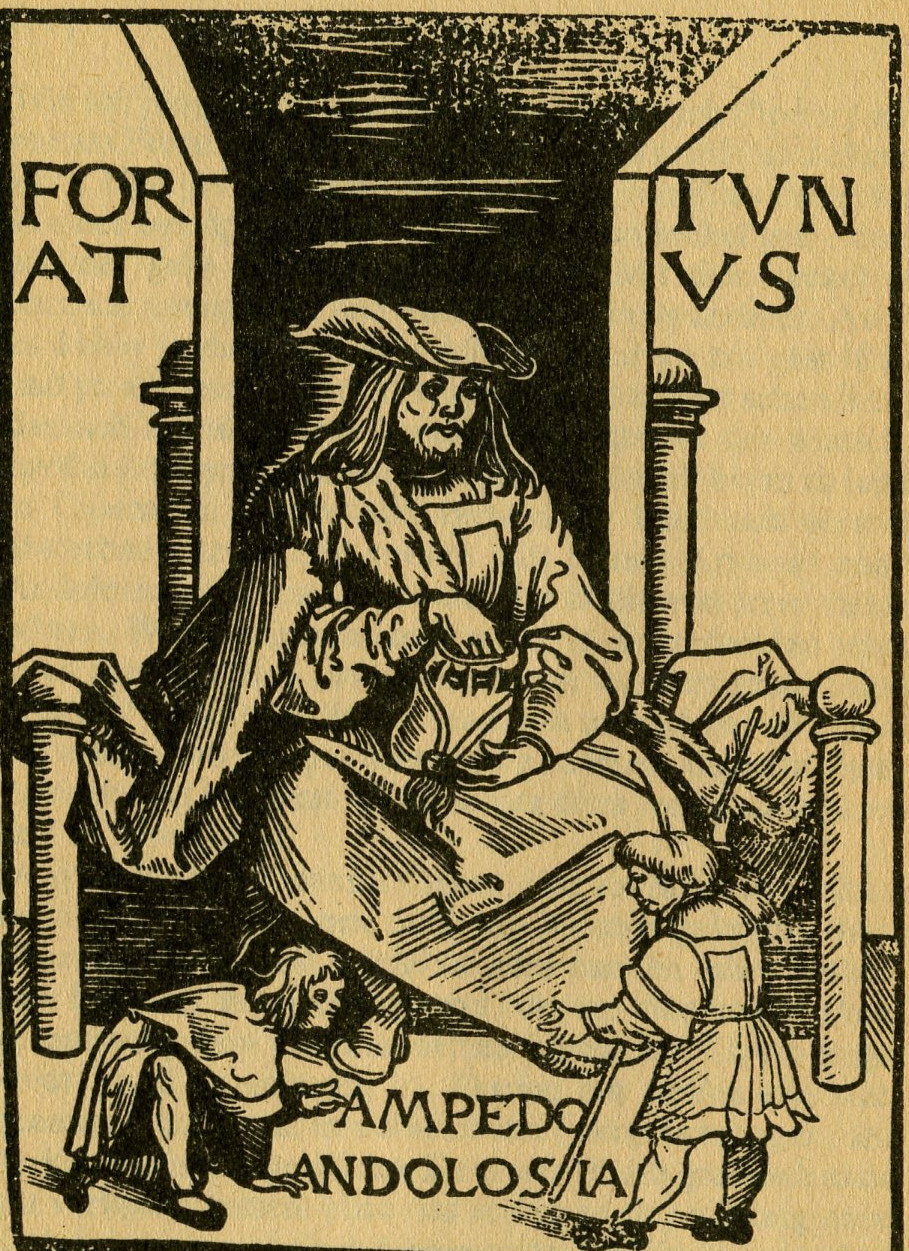 BACK TO THE FORTUNATUS LINK PAGE